Photo Essay: A ride to the snow

This will be my last ride in the high mountains for 2015. It’s the end of October, and the weather is perfect for one last ride into the high mountains. The temperatures are an amazing 14C at the top today, but that will change tonight with the coming bad weather. This is the last chance to do one of the great climbs in Europe – the Timmelsjoch. The Timmelsjoch creates a link through the Ötztal Alps along the border between Austria and Italy. 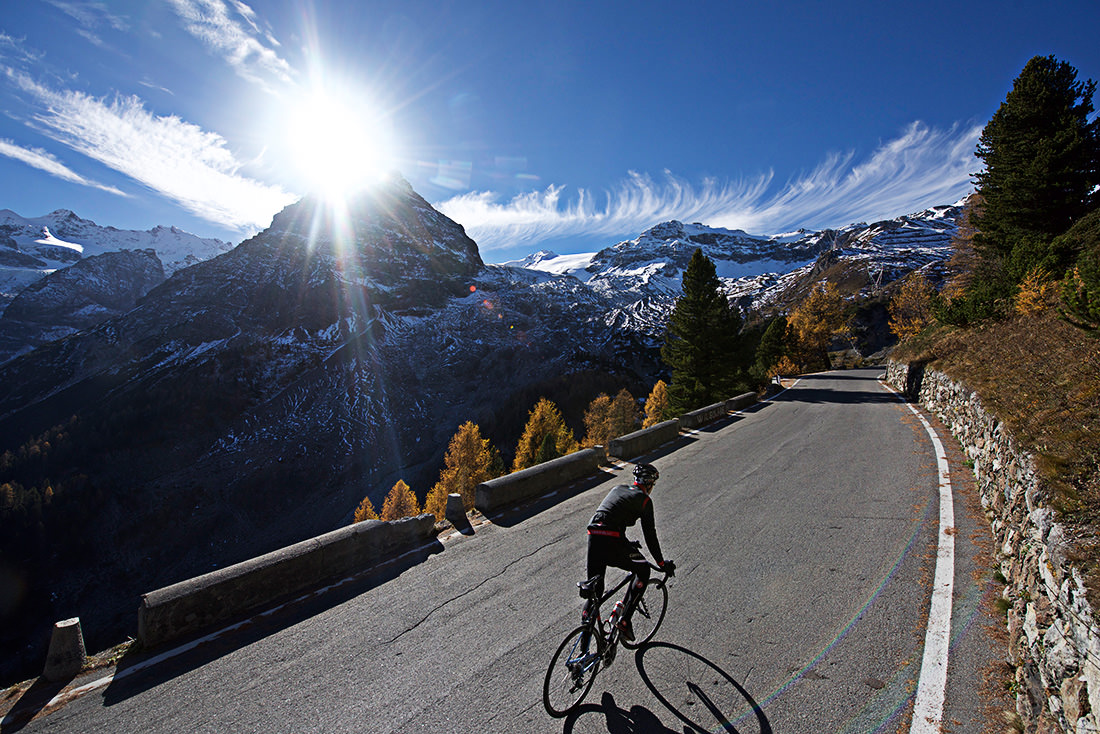 It’s also known as the Passo Rombo, but this was Austria long before it was Italy, and that’s what it was originally called back when it was first mentioned in records dating back to the 13th century, so I generally give a nod to the name that has been usef the longest and from the beginning – it’s the best you can do in a region where the languages are as fluid as they are here. At 2,474 meters (8,117 ft), it’s one of the higher passes in Europe, but certainly not the highest. It is, however, a monster. If you’re going to ride the Timmelsjoch (and you should), do it from the Italian side, starting in St. Leonhard. It’s 29 kilometers to the top from there at an average of 6.2% with an elevation gain of nearly 1800 meters. Like I said, it’s a monster. You can do the Timmelsjoch all by itself and call it a day. Or, if you’re feeling a bit more adventurous, you could do the Timmelsjoch, descend back down to St. Leonhard, and then head up the Jaufenpass as well. If that’s not enough, you’d be well-served to do one of the most difficult granfondo’s of them all: the Ötztaler Radmarathon: Kühtai, Brenner, Jaufen, Timmels. Hard doesn’t begin to do that loop justice. On this late fall day, we only have eyes for the Timmelsjoch though. Starting in St. Leonhard, we wound our way up the valley through blazing forests of orange clad in some of Castelli’s finest for Winter’14. The larch trees’ needles have all turned, and we’re fairly convinced these might be the most beautiful trees we’ve ever seen in the fall. The orange needles are like nothing we’ve ever encountered, and we can’t stop talking about them as the road winds ever higher. About halfway up, we round a bend, and we can see what we still have to do. In the far distance, across the valley, we see the road slice diagonally across the face of a monster slope, disappearing into the rock itself. We didn’t know it at the time, but there’s a tunnel that takes you through the disappearing section and into the final push for the pass.

This is where things get interesting. The road steepens, and there’s a long stretch of around 10%. It’s not anywhere close to crazy steep, but after you’ve been climbing for over an hour already, the gradual steepening of the road bites hard. Fortunately, the views to the surrounding mountains explode outward and upward, while traffic seems to dissolve to nothing. It’s just me and my friends, Christophe, Jered, and Ashley. We’re a happy band of lucky riders – enjoying these last hours of perfect fall. It feels like we’ve won the lottery, and in a way, we have. This is one of those special days, and they’re worth a hundred normal rides. When you get one of these rides – don’t shrug it off or pretend that it’s a normal day. Breathe it in, reach your hand out and touch the orange needles, talk about it, smile about it, but whatever you do, don’t suffer. This isn’t a day for all out efforts or tunnel vision. This is a day for pure enjoyment. 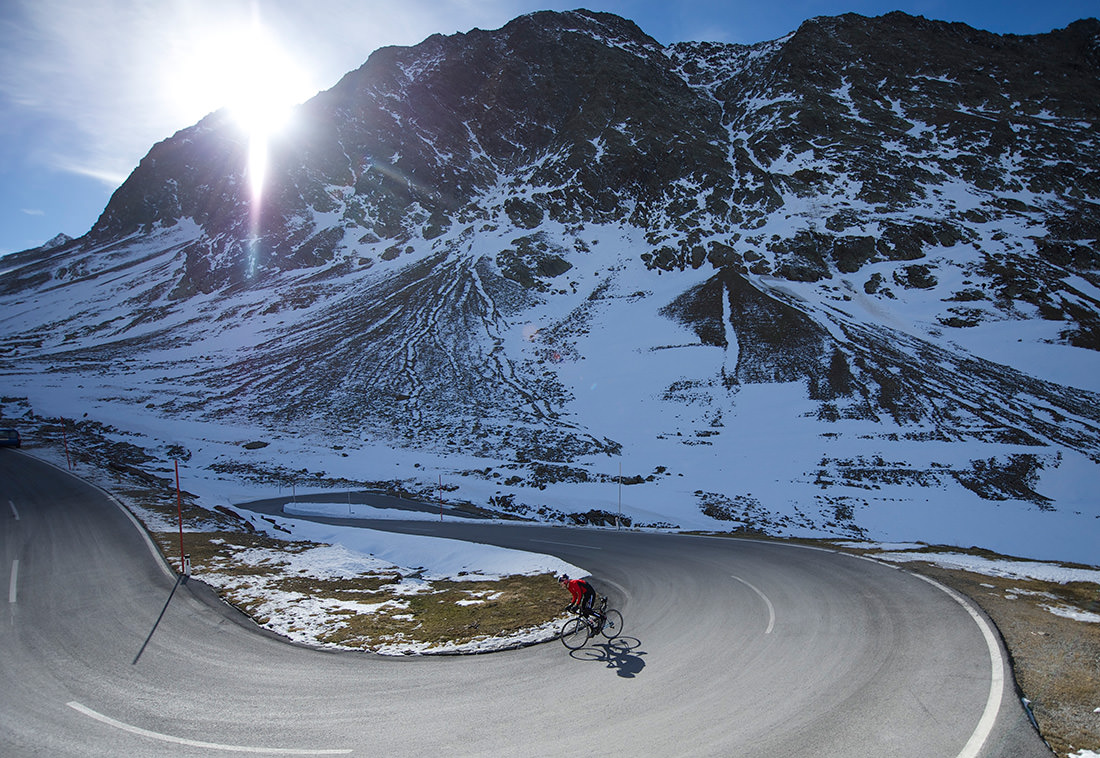 And so we did. We marveled at the mountains we get a chance to play in, the giant amphitheater of the mountains with us on center stage and the white-capped peaks our spectators.

We climbed, and we did our best to keep the effort light, but the mountain made sure that we didn’t finish without some earnest work. The final switchbacks across the great face saw our talk quiet a bit, but only for a little while – a huge tribe of goats had made the road their home. A few sat lazily in the middle of the road, while others clashed horns in the late afternoon light. The top followed soon after. We stopped at the top for a moment, ate, drank, donned jackets, and then headed back down. If 1800 vertical meters is a daunting uphill task, then its downhill brother is 1800 vertical meters of joy. We dashed downhill for our final big descent of the year.

That was a good day. 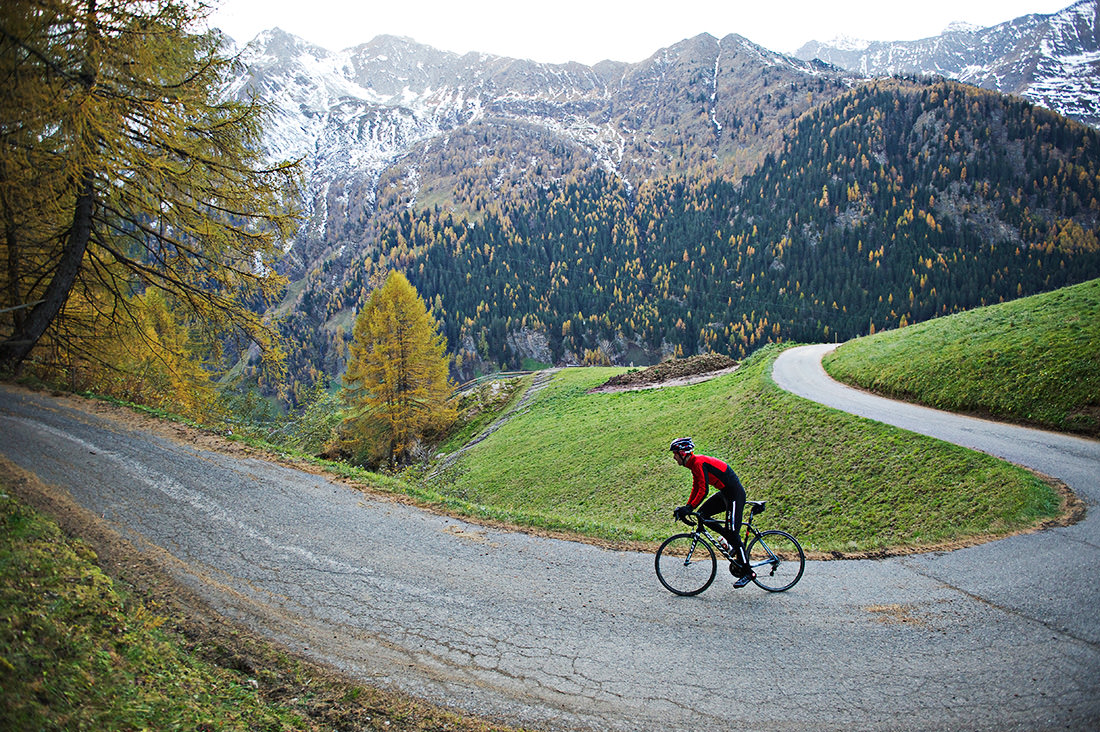 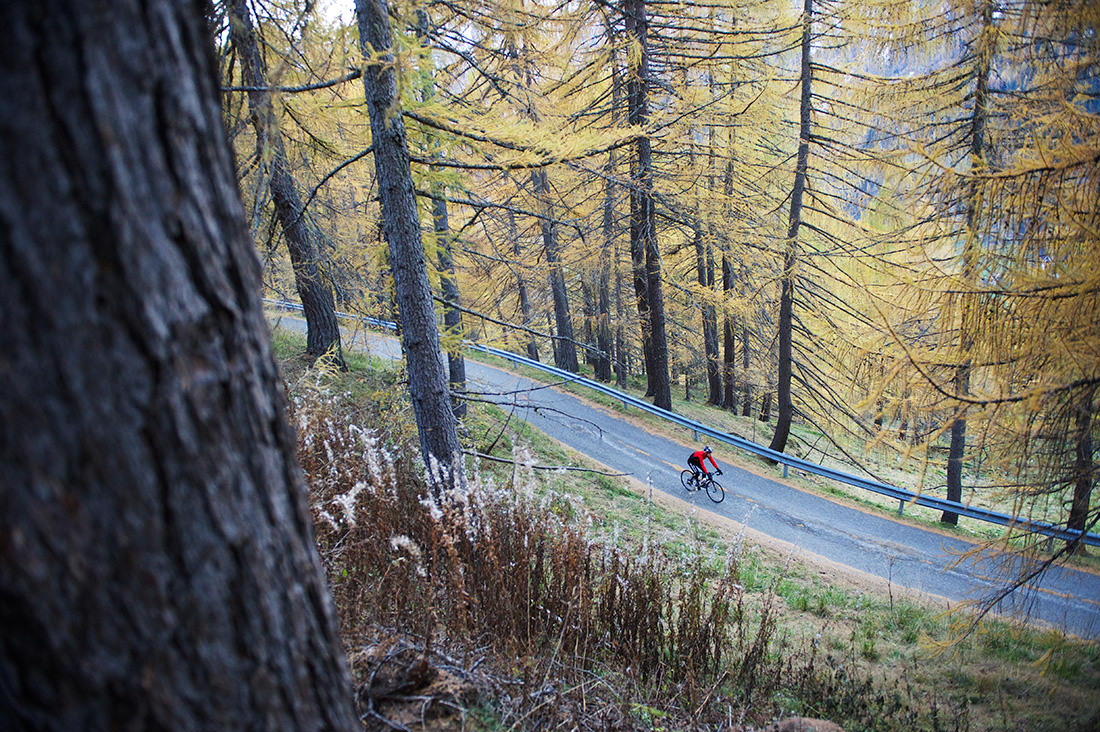 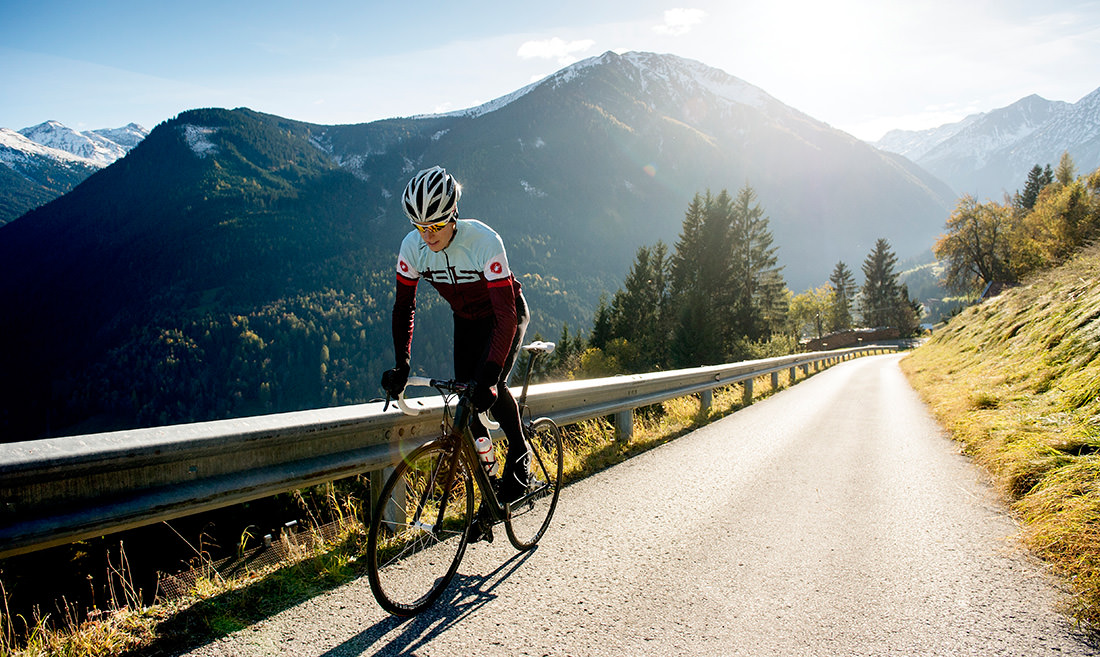 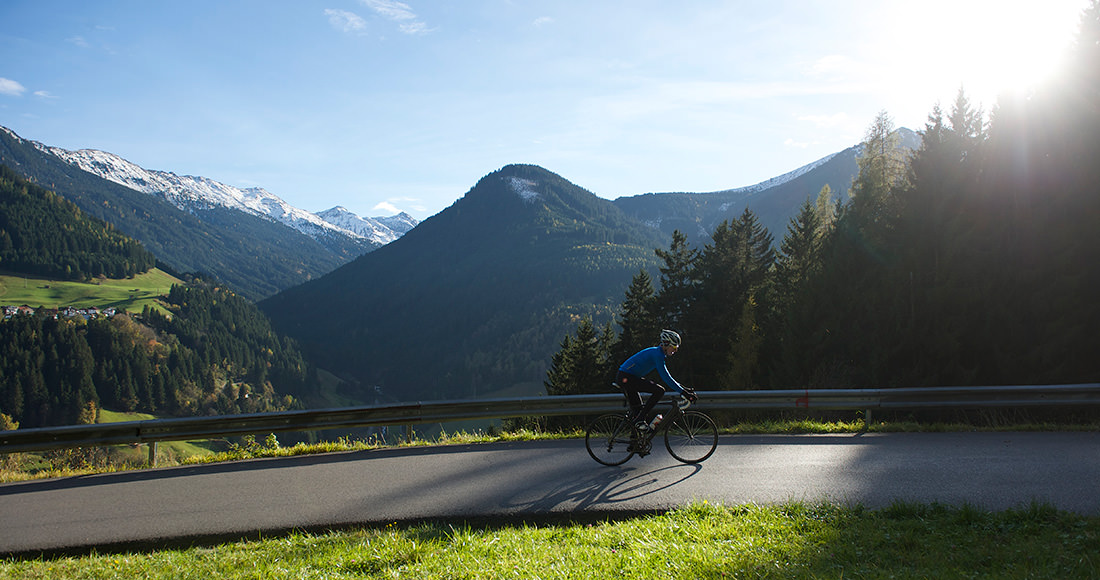 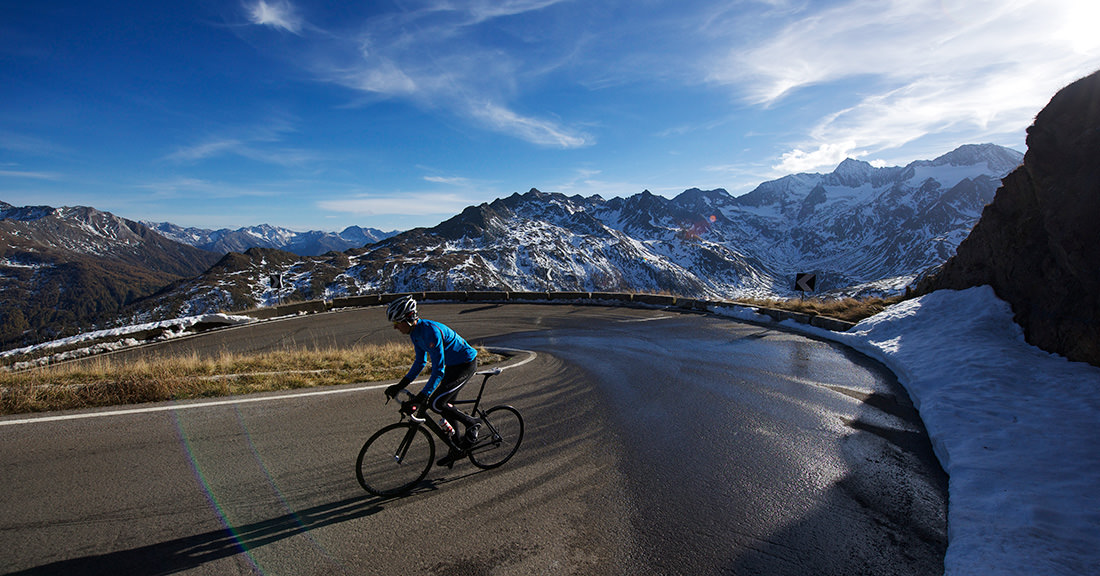