Bottles full, bikes prepped and kit sorted we headed off intrepidly into the hills, thinking the Whakapapa climb would be the perfect aperitif for us before the main climb of the day. Our best laid plans were scuppered early as we rolled up to the Bruce Road to find the ski station access road closed from the Chateau onwards due to ice. The testing conditions we had dreamt of, deemed too testing for cars!

All of a sudden things were looking dire, no one could tell us if the road would open later or even if the Ohakune road was suffering from the same fate. Undeterred, we headed over to see for ourselves, hoping the day wasn’t turning into just a long day driving.

With no signs or gates stopping us, we decided our ascent should be ‘Pro’ style, that is one of us riding while one followed in the New Zealand Road Cyclist car. This way we would have the luxury of accessing kit, plus somewhere to retreat to if the descent became too treacherous.

Liam Friary went first, suited and booted up, big ringing it for the first 6kms through the early shallow sections of the forest, only shifting down to get over a few of the early kickers. As the tree line filters out the real climb starts, opening up into the volcanic rock strewn landscape; climbing past the empty huts normally manned by the snow chain fitters you find yourself looking for extra gears while admiring the view behind you, Mount Taranaki visible beyond the plains.

Into a sharp left hander we were into the steepest section and into the clouds, the mist drizzling into slush on the windscreen as the temperatures plummeted. A hairpin right brings you out onto the ridgeline, exposing Liam to strong sidewinds as the drizzle quickly turned into snow, starting to gather on his handlebars, exactly what we had hoped for! True, not quite replicating the Gavia snowstorm but it was snow never the less. Strangely, there were not many other people up there that day. 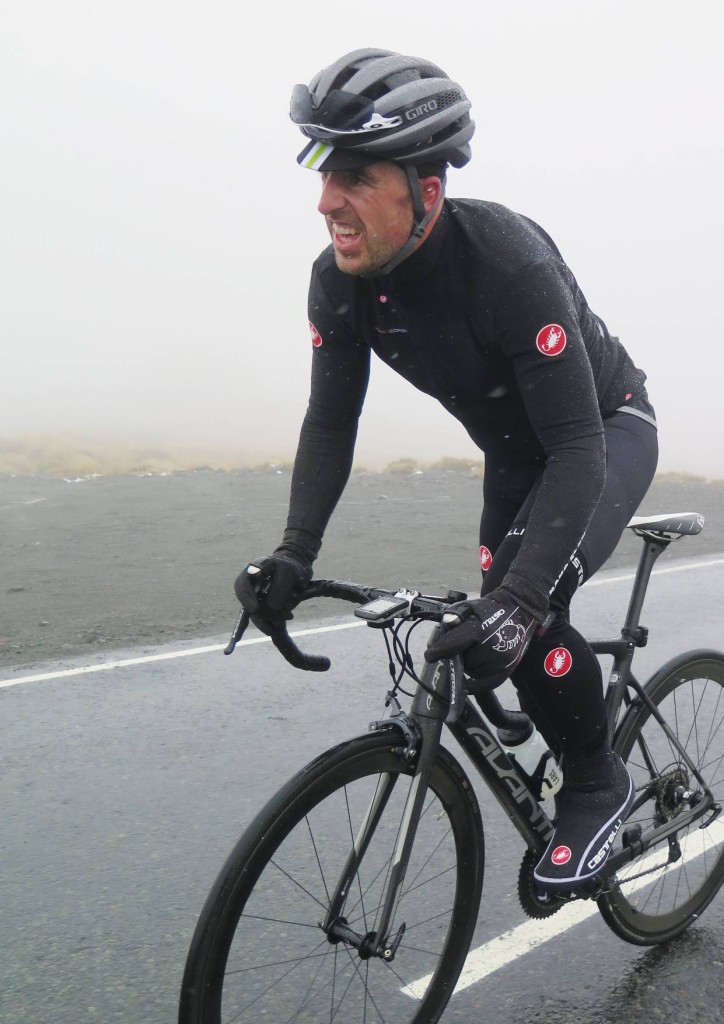 Taylor Gunman holds the Strava record for the climb, 56:13, with these conditions us mere mortals were clearly not going to get near it but that was never the plan, our excuse was we were here to test the clothing and not ourselves. Onwards and upwards we reached the end of the road and noting the tarmac was starting to get slippery because of forming ice it was deemed safer to descend in the car, before we repeated the whole climb for my turn.

Already feeling warmer down at the base, I faced a clearer ascent with just a disappointing drizzle at the top, but it did mean I could ride the whole descent safely, full gassing it through the lower forest sections. Noticing the clouds had now lifted from the mountain we tried our luck back around at Whakapapa – where an open gate and deserted guard hut gave us the green light to seehow far we could go. 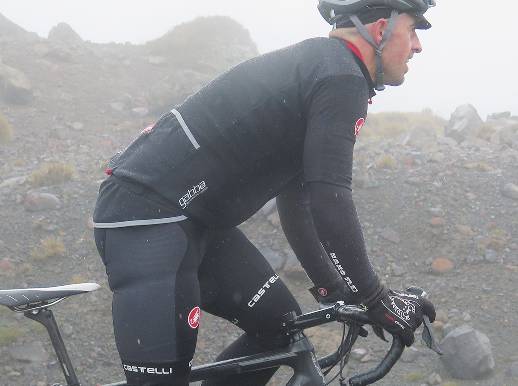 Again employing our ‘Pro’ team car tactic, Liam volunteered as test pilot for the first ascent. The climb, winding itself through the barren landscape, is a steady constant rise compared to the kickers of Mountain Rd, the now clear skies and near freezing temperatures providing ideal test conditions, Liam still dressed for the occasion, gloves and overshoes easily the order of the day.

After roughly 45 minutes of climbing we found ourselves at the ski station car park, time for a rewarding descent – and time to see if the clothing keeps us warm on the way down too!

Gabba Review
There are moments in time when products are released that genuinely revolutionise cycling; the quick-release skewer, lycra shorts, integrated gear shift/brake levers and clipless pedals have all fundamentally changed the sport. Another revolution occurred back in 2009 when Castelli launched the Gabba Jersey.

The Castelli design actually got the idea from Gabriel Rash, then a rider with the Cervelo TestTeam. Rash, whose nickname is Gabba.

The Castelli design actually got the idea from Gabriel Rash, then a rider with the Cervelo Test Team. Rash, whose nickname is Gabba, requested a short-sleeved racing jersey that would be suited to the foul conditions traditionally found during the Spring Classics. 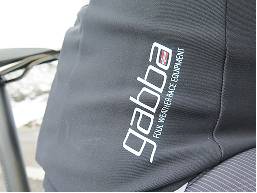 As soon as this jersey was launched it instantly became sought after by other Pros from rival teams, many buying their own, such was its reputation. Replacing the flappy bulky rain jacket with this sleek jersey seemed a no-brainer and the Gabba jersey could be spotted around the Pro peloton whenever the weather got cold or wet, or both.

Acknowledging this, Castelli even released a limited edition ‘Pro’ version that included a marker pen so the Castelli logos could be blacked out just as the Pros from rival teams had done to theirs.

With such a reputation the Gabba was equally sought-after by the general public, and it’s easy to see why. Well designed and incredibly well tailored, the cut snug but complimentary, the material stretchy, breathable, windproof and highly waterproof, the jersey deemed perfect when the going got bad.

The Gabba will not keep you 100% dry on the inside, that was not its design remit. What the Gabba does is keep you warm, the five-phase nanotechnology treatment of the fabric buffering the worst of the rain, the Gore Windstopper fending off wind chill to the body, the close fit preserving generated body heat while maintaining the material’s breathability. 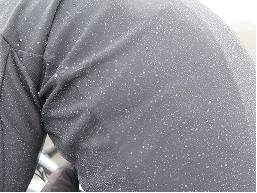 Most importantly it feels good to wear; it doesn’t have the bulk of a traditional winter top and brings an aero race feel to cold weather clothing. Small details like adding a mesh bottom to the pockets so they don’t fill up with water, the added lower back tail section for rear wheel splash protection, the reflective strips, all add to the resulting classy product. Interestingly the zip is not of the sealed variety, Castelli going with on the bike ease of use and instead a flap simply folds over as you zip up, giving the same protection as the rest of the jersey.

Today it still reigns as the go-to top, the all-day top; the Gabba is a lightweight jersey you can wear for anything up to about nine months of the year, from Autumn to Spring, just by regulating your base layers.

Nano Flex Arm-warmers
In my distant past I once had a pair of thin neoprene armwarmers custom made for me by a surf wetsuit maker. The idea was to combat the freezing rain that seemingly only appeared every time I pinned a number on. If only I could have used a time machine and grabbed a pair of these instead. 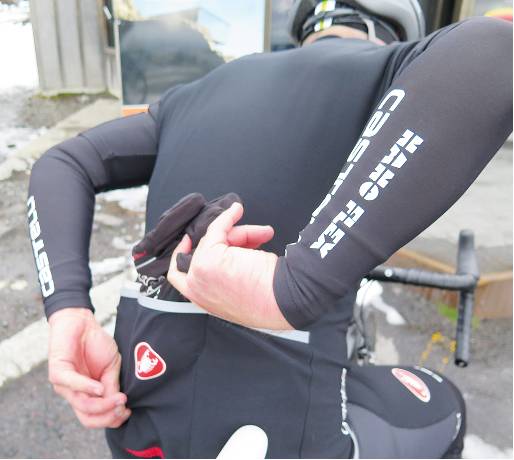 While perfectly complementing Castelli’s famous Gabba jersey, the versatile Nano Flex armwarmers could easily stand alone as the go-to item across a variety of conditions. In the dry they are vented (unlike my neoprene!) but warm due to the light fleece on the inside; while in the wet they boast the similar water beading properties of the Gabba fabric on the outside.

This outer has been coated with nanofilaments of silicone fibre, creating a breathable barrier to the rain, best demonstrated by simply squirting your water bottle on the material; water droplets form and quickly dribble off the water resistant fabric. Providing this tolerance to rain and road spray with their added breathability the Nano Flex armwarmers are ideal for riding and racing in changeable weather conditions, although Castelli are keen to stress that the material is water resistant not waterproof. Therefore, these armwarmers are good for showers but a few hours in the rain and you will be wet, although in my experience you will remain warm due to the thin fleece inner.

Handy double-sided silicone grippers ensure the arm-warmers not only stay up but also help hold your outer jersey in position at the same time. They are made with the typical Castelli snug racing fit but are comfortably stretchy and not tight when riding (although I do boast typical cyclists arms!), and while the factory recommendation is wearing them over 10C, I’d say they’d be good for colder conditions too and they certainly worked well over a thin long sleeve undervest as the temperatures got closer and closer to zero. Although pitched to match the short-sleeved Gabba on hideous days, they could also work well in conjunction with a light gilet in warmer, changeable conditions. Available in four sizes in black, white and red.

Ultra Shoecover
Losing the feeling of your feet during a winter ride will not only severely spoil your fun but could potentially do some serious damage. So slipping a winter bootie or shoe cover on will offer the dual benefits of protecting your feet and your expensive shoes from the elements. The Castelli Ultra Shoecover is constructed with the same Gore Windstopper fabric that is used in many of their cold weather products. Multiple panels of the lightweight stretchy Windstopper material have been pieced together to form an anatomic shape for the shoe and ankle, the fabric providing enough flexibility to fit snugly but not squeeze the lower calf. 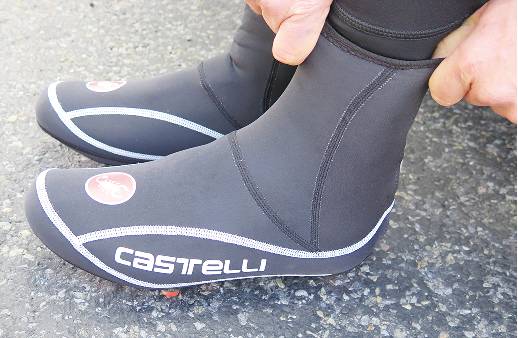 The base has two cut outs, one for your cleats, the other for the heel of your shoe, to aid stability when walking. The rear zipper is waterproof and has a neoprene liner for comfort, plus an additional flap at the top to house the zip in its closed position. The zip also has a reflective coating for additional visibility during those dark nights or early morning rides.

As with Castelli’s other Windstopper products the material is breathable yet effective against wind-chill, provides a barrier from road spray and showers while the microfleece inner aims to keep your feet and ankles toasty. Normally I’d reach for shoe covers if it was wet and/or the temperature drops below 5°C, but because of the breathability of the material Castelli’s recommendation is to wear these once the temperature drops below 10°C. Available in five sizes, in black or extra fluoro.

WORDS AND PHOTOGRAPHY BY RUSSELL JONES for NZ ROAD CYCLIST