After back-to-back runner-up rides at the Critérium du Dauphiné, Sonny Colbrelli got his win on Tuesday’s stage 3.

The 172.2 km stage from Langeac to Saint-Haon-Le-Vieux came down to a reduced sprint after two early escapees were caught. The Ineos Grenadiers and UAE-Team Emirates led the way into the uphill finale, and then Alex Aranburu launched his sprint with around 300 meters to go.

Colbrelli quickly jumped onto his wheel, however, and the duo opened a sizable gap to the rest of the field. With a little over 100 meters to go, Colbrelli jumped and surged past Aranburu, holding on to take his first win of the year at the line. Aranburu settled for second with Brandon McNulty (UAE-Team Emirates) nabbing third on the day. Lukas Pöstlberger finished safely to retain his overall race lead. 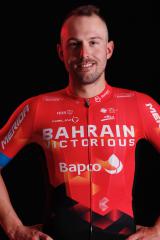