Riejanne Markus (Jumbo-Visma) won the second stage of the Ladies Tour of Norway after a long-range solo breakaway. Once again the peloton just missed out on the victory, and once again Team DSM finished second on the stage. Coryn Rivera sprinted to second with Alison Jackson (Liv Racing) taking third.

After the stage, Kristen Faulkner (Tibco-SVB) held on to her leader’s jersey but Markus gained enough time to be tied with the American in the general classification ahead of stage 3.*

Just like the finale of stage 1, a lone breakaway survivor held an advantage over the peloton into the final 15 km of stage 2. Unlike the previous day, the solo rider out front had a large gap to the peloton. With only 10 km to go, Markus led the race by just over a minute.

Markus, who is normally resigned to working for Marianne Vos in races, took control of the race with 23.5 km to go when she left her breakaway mate behind to get caught by the chasing peloton and continued on alone.

As the peloton chased, splits started to fracture the group. Markus still led the race by 19 seconds with 3 km to go.

On Thursday the peloton’s slow mobilization to chase allowed Faulkner to win the stage, and once again the stage came down to the final moments. Rivera opened up her sprint with 200 meters to go, but it was too late to catch Markus who claimed her first WorldTour victory.

* Overnight the race organizers reviewed footage of the finish and found the Markus finished two seconds ahead of Rivera and the peloton. With her bonus seconds claimed over the stage, Markus was awarded the leaders jersey ahead of stage 3. 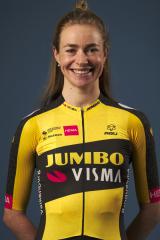