Marlen Reusser (Ale’ BTC Ljubljana) continues to impress in 2021 by winning the opening stage of the Ceratizit Challenge by La Vuelta with a solo move. The rest of the podium was swept by the breakaway Reusser was part of, with Coryn River (Team DSM) taking second and Elise Chabbey (Canyon-SRAM) third.

Reusser now leads the general classification by 26 seconds ahead of Rivera.

Reusser, Chabbey and Rivera were joined by two other riders in a breakaway that formed before the categorie 1 climb midway through the stage. The break secured over two minutes on the peloton before the 30 km to go mark, after the climbing had subsided. Their advantage didn’t drop even as the chasing from the peloton picked up. With 5 km to go the breakaway of four, after losing Lucy Kennedy (Team BikeExchange) had one minute 55 seconds.

Chabbey was active to try and get away from the other three and each time she attacked Reusser clawed her back until Reusser went clear with 2.3 km to go

As Reusser rode away Rivera, Chabbey, and Roojakkers sat up, allowing the Swiss national champion to ride away. Reusser rode the final two kilometres to the finish, and the rest of the podium was decided by a sprint between the three remaining breakaway riders.

The peloton finished nearly a minute and a half behind Reusser, a formidable time gap for the Olympic silver medalist with a time trial coming on stage two. 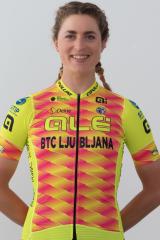