Rafał Majka wins stage 15 of the Vuelta after 87.4 km solo

Rafał Majka wins stage 15 of the Vuelta after 87.4 km solo

Rafał Majka (UAE Team Emirates) won stage 15 of the Vuelta a España after going solo 87.4 km from the finish.

Stage 15 covered 197.5 km from Navalmoral de la Mata to El Barroco, taking on four categorised climbs along the way. The last and easiest ascent was the third-category Puerto san Juan de Nava (8.6 km at 3.8%), topping out 5.4 km from the finish, and from there it was a downhill run to a flat finale.

The first couple of hours were completed at a furious pace. For a tantalising few kilometres, it looked like a 25-rider breakaway might snap the elastic within the first 15 km, but there were enough teams who missed out to make things difficult for everyone.

The decisive move didn’t come until almost 75 km into the stage, when Majka accelerated on the lower slopes of the Cat 1 Alto de la Centenara (15.1 km at 5.5%). A sprightly looking Fabio Aru (Qhubeka-NextHash) followed and they were briefly joined by Maxim Van Gils (Lotto Soudal) as probing attacks continued behind.

By the top of that first climb, Majka and Aru led a large chasing group by around 30 seconds with the peloton now over a minute behind, finally happy with the situation.

The progress of the large chasing group was hampered by a lack of cohesion, so the lead pair saw their gap increase on the way to the second climb of the day. Sadly though, the stage hopes of the 2015 Vuelta champion were short-lived, Aru unable to match Majka on the Cat 2 Puerto de Pedro Bernardo (9 km at 4.2%). The Pole went solo 87.4 km from the finish.

In the group behind, Steven Kruijswijk (Jumbo-Visma) was one of the most active, and he finally rode away from a small chase group he’d initiated at the foot of the penultimate climb. The Cat 1 Puerto de Mijares (20.4 km at 5.4%) was the biggest challenge of the day, but despite his best efforts, Kruijswijk was unable to win more than a few seconds back from Majka who’d been solo for almost 35 km.

With 10 km to go, Majka’s lead was back out to 1:48 over Kruijswijk, lone chaser Chris Hamilton (Team DSM) over a minute further behind. In the end, that’s the order in which they finished, Majka celebrating his first victory since the 2017 Vuelta.

In the GC race, Adam Yates (Ineos Grenadiers) finished a strong fourth to take back 15 valuable seconds having attacked on the final climb. The rest of the GC players came home together, which means Odd Christian Eiking keeps the overall lead at the end of a day controlled by a determined Intermarché-Wanty-Gobert Matériaux. 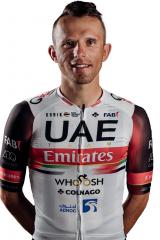