Three weeks after starting at the cathedral in Burgos, the Vuelta came to a close at the Catedral de Santiago de Compostela, the traditional culmination of the Camino de Santiago pilgrimage route. To complete their own 21-stage pilgrimage, the peloton faced a lumpy 33.8 km individual time trial that would suit specialists in the discipline.

First off the ramp in Padrón was Czech national champion Josef Černy (Deceuninck-QuickStep) who was expected to set a solid benchmark for the day. His stint in the hot seat was not as long as he might have hoped however, as Magnus Cort (EF Education-Nippo) took over a minute out of his time just an hour later.

As the evening wore on, it was clear that the only man who could possibly challenge Cort’s time was Roglič, and sure enough, the race leader came through the first time check 20 seconds faster than the Dane. A momentary loss of concentration almost cost him dearly before the last uphill drag, but the Olympic champion held on to win by 13 seconds, overtaking his ‘minute man’ Enric Mas (Movistar) on the way to the line. Cort settled for the runner-up spot – and would visit the podium to collect the Most Combative award – and Thymen Arensmen (Team DSM) finished third.

By the end of the time trial, Roglič had extended his gap to Mas to a gaping 4:42, the largest winning margin since 1997, and Australian Jack Haig (Bahrain-Victorious) confirmed his third place overall. The only real movement in the GC top 10 was David de la Cruz’s (UAE Team Emirates) jump from ninth to seventh. 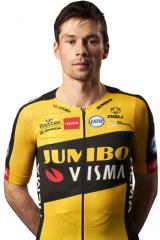