Lukas Pöstlberger soloed to victory on stage 2 of the Critérium du Dauphiné on Monday, taking over the race lead in the process.

The 29-year-old Austrian joined Shane Archbold (Deceuninck-QuickStep), Anthony Delaplace (Arkéa-Samsic), Matt Holmes (Lotto-Soudal), and Robert Power (Qhubeka-Assos) to form the day’s break in the early goings of the 172.8 km stage. Power was dropped with around 60 km to go, and then Pöstlberger and Shane Archbold surged off the front with a little over 30 km to go.

With the peloton at around two and a half minutes back, Pöstlberger dropped Archbold on an uncategorized rise with around 20 km to go. His advantage began to fall as he made his way up the second-category penultimate climb of the day, but he still had nearly a minute left as he crested the ascent with just under 7 km to go. Ben O’Connor jumped from the pack as it went over the top of the climb and closed to within around 20 seconds as Pöstlberger made his way up the fourth-category final climb of the day, but Pöstlberger went up and over with a gap intact.

The pack, led by Bahrain Victorious and Movistar, caught up to O’Connor on the descent to the finish, but Pöstlberger held on, taking the victory with an 11-second gap back to Sonny Colbrelli (Bahrain Victorious), who took runner-up honors for the second straight day with Alejandro Valverde (Movistar) in third. 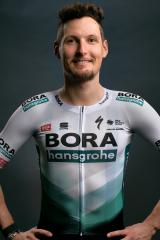 The post Pöstlberger solos to victory on stage 2 of the Critérium du Dauphiné appeared first on CyclingTips.