Amy Pieters (SD Worx) sprinted to victory after a wet stage 2 circuit race at the AJ Bell Women’s Tour. Pieters was part of a select breakaway of ten that escaped on the Barr Beacon climb. Clara Copponi (FDJ Nouvelle-Aquitaine Futuroscope), who finished third on stage 1, did one better on stage 2 and finished second behind Pieters. The result also moved Copponi into the race lead. Sheyla Gutiérrez (Movistar) rounded out the stage podium in third.

The 10 km circuit turned the stage into a race of attrition, with the Barr Beacon climb slowly reducing the size of the peloton with each pass. Although there were also a lot of attacks throughout the stage the winning move did not go clear until the final climb of the race.

By the finish, the group of ten had extended their advantage over the peloton to 42 seconds. The advantage allowed Copponi to take the leader’s jersey from Marta Bastianelli (Alé BTC Ljubljana). The Frenchwomen will start stage 3 in the general classification lead although she is tied on time with Pieters. 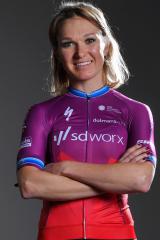