Phil Bauhaus (Bahrain Victorious) nabbed the opening stage of the Tour of Poland on Monday in Chełm.

The 216.4 km stage 1 from Lublin came down to a sprint in a cobbled, slightly uphill finale, which was lined with new and improved barriers one year after the scary crash at the downhill finish in Katowice on the opening stage of last year’s race.

With some 300 meters still to go on Monday’s stage into Chełm, Álvaro Hodeg (Deceuninck-QuickStep) was the first big contender to launch his move. The 24-year-old Colombian jumped out to a big gap at first, but Bauhaus wound up to speed behind him and then came surging past in the closing meters to take the win. The victory marked Bauhaus’s sixth pro win so far in 2021. 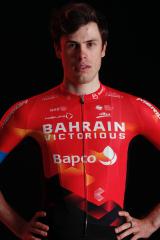