Wednesday saw Peter Sagan nab stage 1 of the Tour de Romandie on a rainy day in Switzerland. In other news, Hugh Carthy has extended with EF Education-Nippo.

Read on for the latest from the world of cycling.

Peter Sagan nabbed his second victory of the 2021 season on Wednesday’s stage 1 of the Tour de Romandie.

The lumpy, 168.1 km stage came down to a sprint finish on rain-slicked roads in Martigny, Switzerland. Bahrain Victorious led the way into the last few hundred meters for Sonny Colbrelli, who launched his sprint with around 300 meters to go with Sagan tucked in behind. Colbrelli led into the last 150 meters, but Sagan then surged past to take the victory at the line.

Colbrelli settled for second with Patrick Bevin taking third on the day. Rohan Dennis, who won Monday’s prologue, finished safely with the pack to retain his overall race lead. 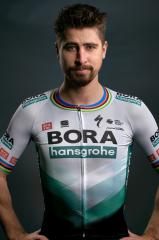 UAE-Team Emirates named its Giro d’Italia squad on Wednesday and Brandon McNulty, who had been expected to be a team leader at the race, won’t be making the start. Cyclingnews reports that he will probably race the Tour de France instead.

According to Cyclingnews, after McNulty’s strong start to 2021, his team decided that he could be ready to make his Tour debut in support of defending champion Tadej Pogacar. Davide Formolo will lead UAE-Team Emirates at the upcoming Giro.

Hugh Carthy has extended his contract with EF Education-Nippo, the team announced on Wednesday.

The 26-year-old Brit has been with the team since 2017, coming aboard after two seasons with Caja Rural-Seguros RGA. He has developed into one of the squad’s top GC riders, taking a stage win and third overall at last year’s Vuelta a España.

“Over the past few seasons he has really blossomed as a climber and has become a leader in this team as well. We are excited to have Hugh Carthy be part of the future of this team,” EF Education-Nippo CEO Jonathan Vaughters said. “Hugh represents this team’s foundational values. He works hard, isn’t scared to punch above his weight, and, most importantly, he stays true to himself. We knew his work ethic would pay off, and we’re just glad people are starting to notice.”

Atsushi Oka of the Delko team has received a four-month ban (which started in January) after testing positive for acetazolamide on December 13 of last year. Oka’s ban comes to an end on May 24.

In other news of the Delko team, La Provence reports that sport director Gorka Gerrikagoitia is leaving the squad, and other staffers are also set to leave, as the organization looks to reduce costs amid major financial difficulties.

Brompton is collaborating with 13 artists and bands to raise money for Crew Nation, a relief fund for music crews impacted by COVID-19.

Over the next few weeks, the bike company will reveal custom bikes designed in conjunction with Foo Fighters, Radiohead, Phoebe Bridgers, LCD Soundsystem, Khruangbin, Nathan East, Dinosaur Jr, Oh Wonder, Underworld, Sub Pop, Enrique Iglesias, Rise Against, and Neko Case that will be live auctioned on May 28. You can find out more here.

The Tour de Romandie continues on Thursday with a 165.7 km stage 2 from La Neuveville to Saint-Imier that could see some GC action. The route features five second-category climbs before a first-category final ascent that tops out around 17 km from the finish.

In case you missed it …