Jumbo-Visma came to Paris-Nice with the race favourite Primož Roglič and didn’t waste time proving a point. The Dutch team not only won the first stage of the race with new signing Christophe Laporte but a late-race move resulted in a three-rider break containing Laporte, Roglič and Wout van Aert. The three Jumbo-Visma riders quickly organized to gain 19 seconds on the fourth-place finisher Pierre Latour (TotalEnergies).

“No it wasn’t planned,” Laporte said at the finish. “It was crazy. I was going to attack, it was really stretched out, the team was fantastically strong and when I accelerated I didn’t know that Primož was there.”

Paris-Nice is Laporte’s second race with his new Jumbo-Visma team after spending eight years with Cofidis. The first was Kuurne-Bruxelles-Kuurne at the end of February where the French rider finished eighth.

“I want to say thank you very much to the team, they told me with 1 km to go I would win the stage, it’s a nice gift,” Laporte said.

Jumbo-Visma took control of the peloton in the final 10 km before the peloton reached the final climb of the day. Laporte attacked with 6.5 km to go, only to find Van Aert tight on his wheel. Initially Van Aert, Roglič and Laporte were joined by Zdenek Štybar but the Quick-Step Alpha Vinyl was distanced by the time the climb topped out at 5.6 km to go.

Behind the Jumbo-Visma trio, the peloton struggled to organize. The pace going into the climb and the attack from Laporte left the peloton strung out and discombobulated. No teams were able to take control of the chase. While Van Aert, Laporte and Roglič seamless rode together the peloton lost more and more time.

Roglič will go into the next seven stages with a head start on his rivals. After time bonuses Roglič sits 28 seconds ahead of other general classification hunters like Brandon McNulty, Jack Haig, and 2021 winner Maximillian Schadchmann. His first mountainous test doesn’t come until stage 5, and with three flatter stages before then Laporte has an opportunity to hold on to his leader’s jersey for a few days. The stage 1 winner has four seconds on his teammate Roglič and 29 seconds on the next non-Jumbo-Visma rider Latour. 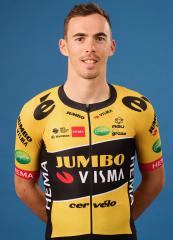