Paris-Nice: Burgaudeau narrowly holds on ahead of the sprinters to take his first pro win

Paris-Nice: Burgaudeau narrowly holds on ahead of the sprinters to take his first pro win

Mathieu Burgaudeau claimed his first pro victory in style on Friday’s stage 6 of Paris-Nice, soloing clear inside the last 10 km and holding on by the slimmest of margins to deny a hard-charing pack of sprinters.

The 23-year-old Frenchman powered clear of the peloton with around 9 km to go and worked his advantage up to around 20 seconds before the sprinters’ teams upped the pace and started to close down the gap.

An uphill gradient in the finale made things all the more challenging for the lone attacker trying to keep the fast finishers at bay, but Burgaudeau did just that, taking the victory with hardly any room to spare.

Mads Pedersen settled for runner-up honors on the day ahead of Wout van Aert in third, with the sprinters arriving close enough behind Burgaudeau to finish on the same time. They weren’t close enough, however, to deny Burgaudeau his first ever win as a pro.

Primož Roglič finished safely in the pack to retain his GC lead. 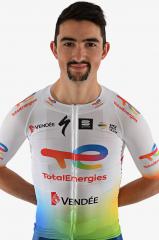