Stage 7 was the first real mountain test for the Dauphiné peloton, going over 2,000m for the first and only time in the race on the final climb to La Plagne. With the lion’s share of the climbing in the second half of the stage, the breakaway took a long time to form after a blisteringly fast opening phase. The two strongest among them stayed clear until 10km to go when the GC race took over.

Movistar had done a great deal of work throughout the day, but it was Richie Porte who made the decisive move. Sepp Kuss (Jumbo-Visma), Enric Mas (Movistar) and Mark Padun were the only ones who followed. Before long, Padun and Kuss attacked again, and the moment of hesitation as Porte looked back at the chasing group probably cost him the stage.

The young Ukrainian had nothing to lose as he climbed up to the ski resort, dropping Kuss in the last 5km and soloing to his first ever WorldTour victory. 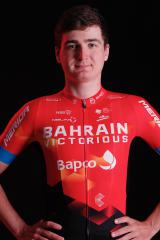 The post Padun wins stage 7 of the Critérium du Dauphiné as Porte takes the GC lead appeared first on CyclingTips.