Last October, Formula presented the new version of the Selva equipped with a “2Air” air cartridge with separate chambers for independent management of the positive and negative springs. Thanks to this solution, the mainstay fork from the Italian brand sees further adjustment possibilities, drawing inspiration from the Nero DH fork, for a level of customization that is even more refined from a racing point of view. In fact this new version takes the name of Selva R where the “R” stands for race. After testing it with great first impressions last June in the first ride at Les Gets, I requested a sample to test more thoroughly. This is a version for 29-inch wheels, with a 46mm offset and 160mm of travel, mounted on my MDE Damper 29 which I use for component testing. After six months of intense riding, here’s what I thought of it… 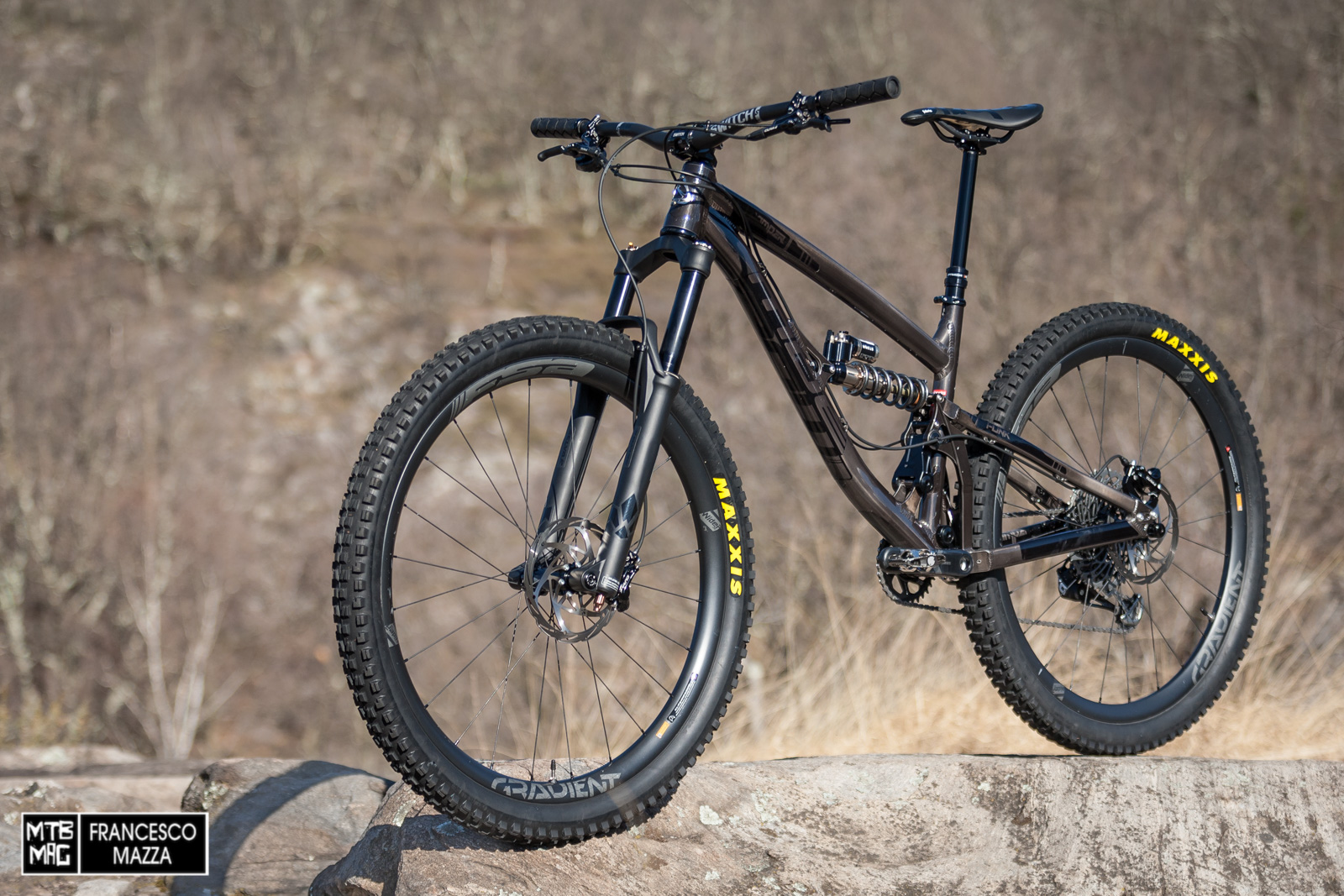 With the exception of the new 2Air air cartridge, the Selva R stays entirely in line with the original characteristics of the Selva, now renamed Selva S to differentiate it from the last iteration. Indeed it is possible to replace the air cartridge from the Selva S or any other previous model with the new 2Air to have a Selva R and vice versa. The total modular nature of each component of the past, present and future Formula forks is one of the key points of the Tuscan brand philosophy, explained in depth by Vittorio Platania, the company’s marketing and communication manager, in the following video.

The Selva R hydraulics therefore have the same sealed cartridge with IFT that mounts the Selva S, equipped with 12 clicks in compression and 21 clicks in rebound, lock-out and adjustment of the release threshold. With the Selva R, Formula has introduced new hydraulic cartridge adjusters that now equip the entire Selva range. The new controls have a lower height to reduce clutter and risk of interference with the down tube of some frames. The upper surface, unlike the previous version, is flat and allows for the adoption of laser etched indications. 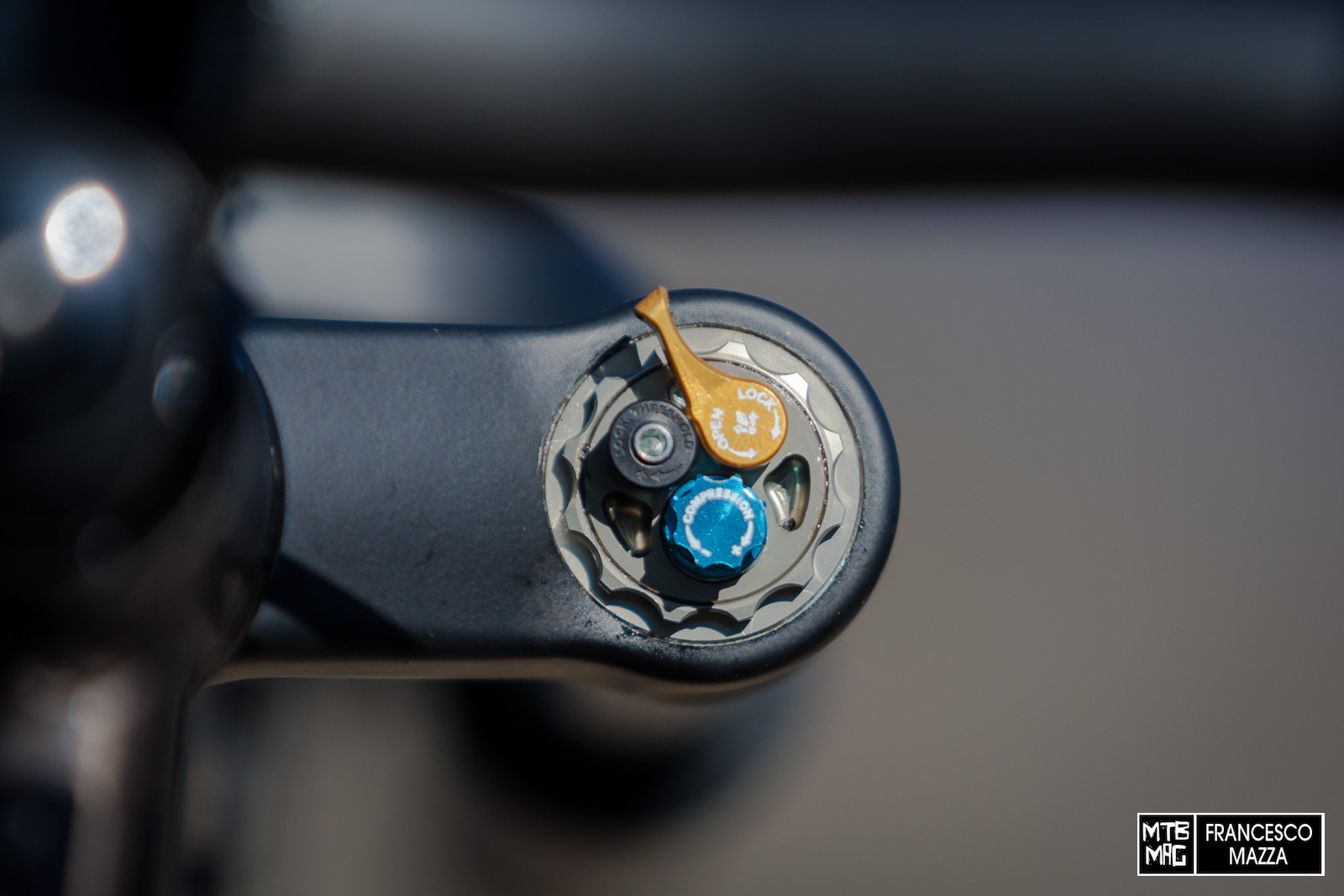 Below the blue compression knob we find the crown jewel of the Selva range hydraulic cartridge, the creator of its versatility: the CTS valve system. By replacing a small valve it is possible to alter the behavior of the fork according to the needs of the rider, their riding style and the characteristics of the trails that they usually face. More details in the CTS valve comparison test. Formula comes as standard with a Gold valve, with a Blue one also supplied, in addition to the special installation key. Personally I chose to use an Orange valve, while in the Selva S, I used a Green compression unit. 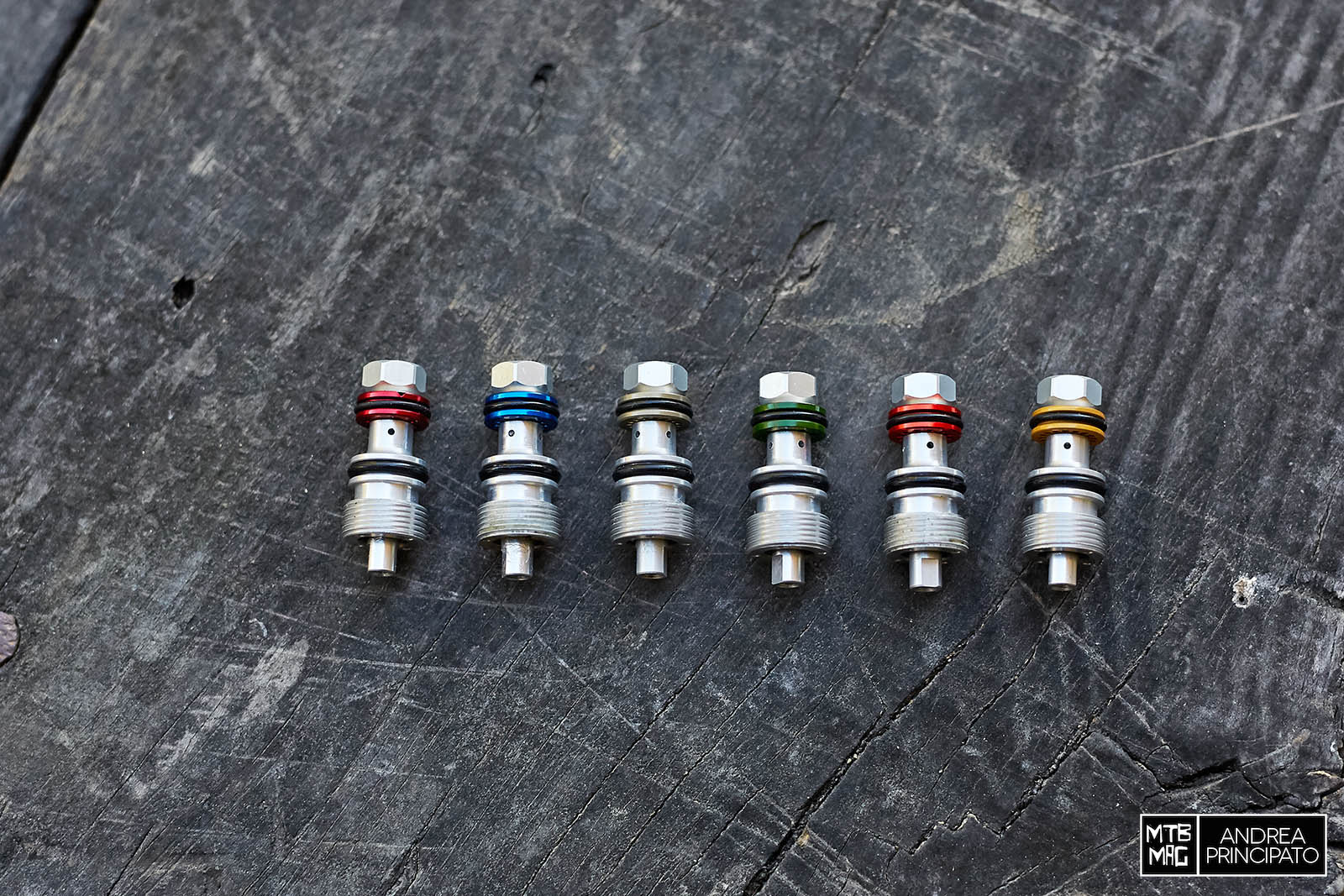 The Selva R chassis structure is also the same as the previous model, the current Selva S. The hollow crown is forged aluminum and the brake arch has deep ribs to improve the structural rigidity of the fork, to which the Hexagon Design system in which the stanchions are fitted. The stems have a diameter of 35mm and are made of 7075 alloy with a hard black anodized finish. The available travel ranges from 130 to 160mm for the 29″ version and from 120 to 160mm for the 27.5″ version, in both cases adjustable using the internal shims provided. For those who want more travel, there is the 27.5 EX version with 170 or 180mm of travel. There are two choices regarding the offset with the 46mm option for both the 27 and 29″ version. 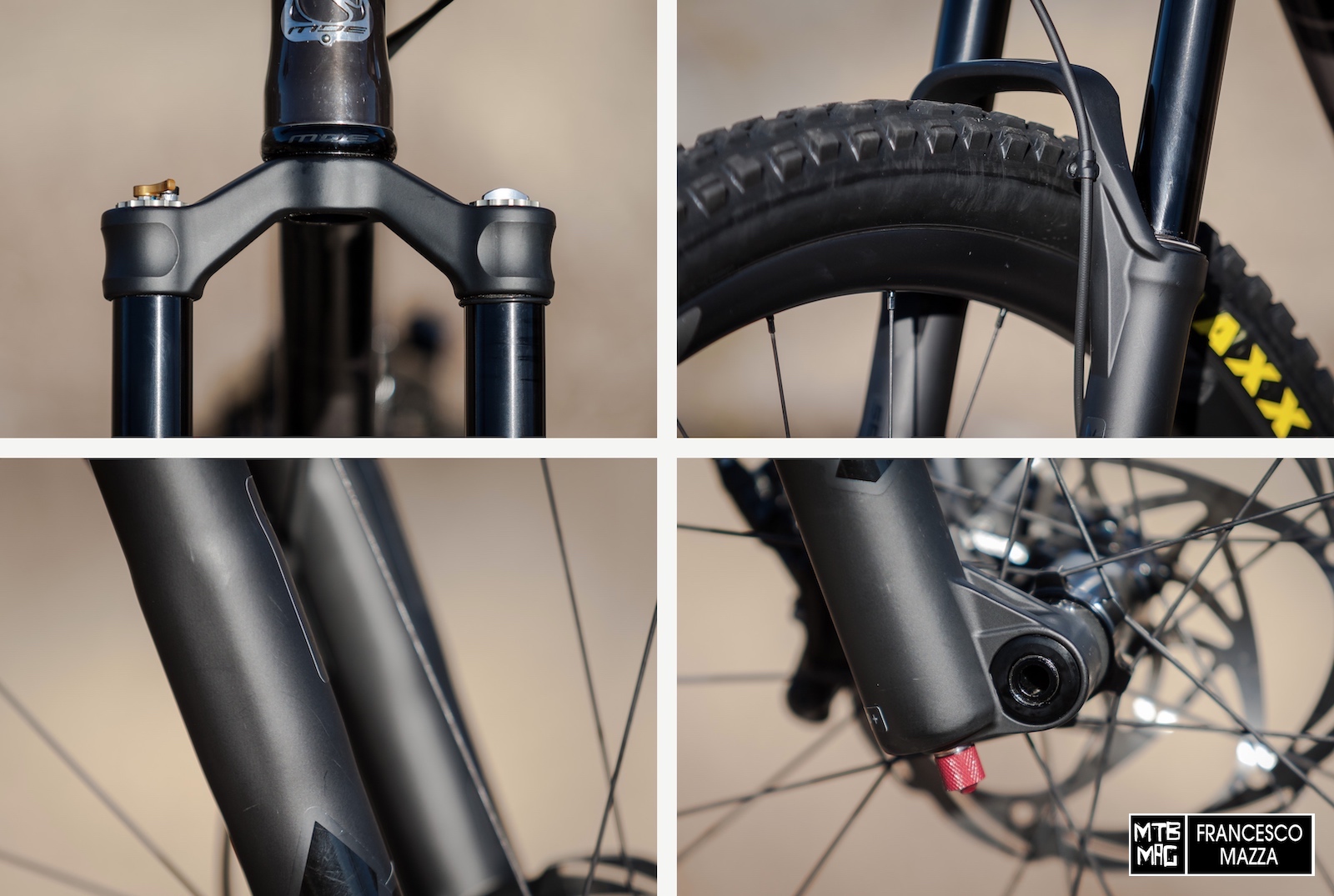 The axle is also offered in two options, the now traditional 15x110mm version and a 20x110mm option that Formula classifies as an Enduro Race version. Both options are equipped with ILS (Integrated Locking System) which allows the axle to be easily tightened and the lever to be closed without much effort. The lever can be removed from the axle to be used (if compatible) as well on the rear wheel, or removed permanently for those who prefer to save weight (30g), using a traditional 5mm Allen key or a multitool if necessary, in place of the quick release lever. 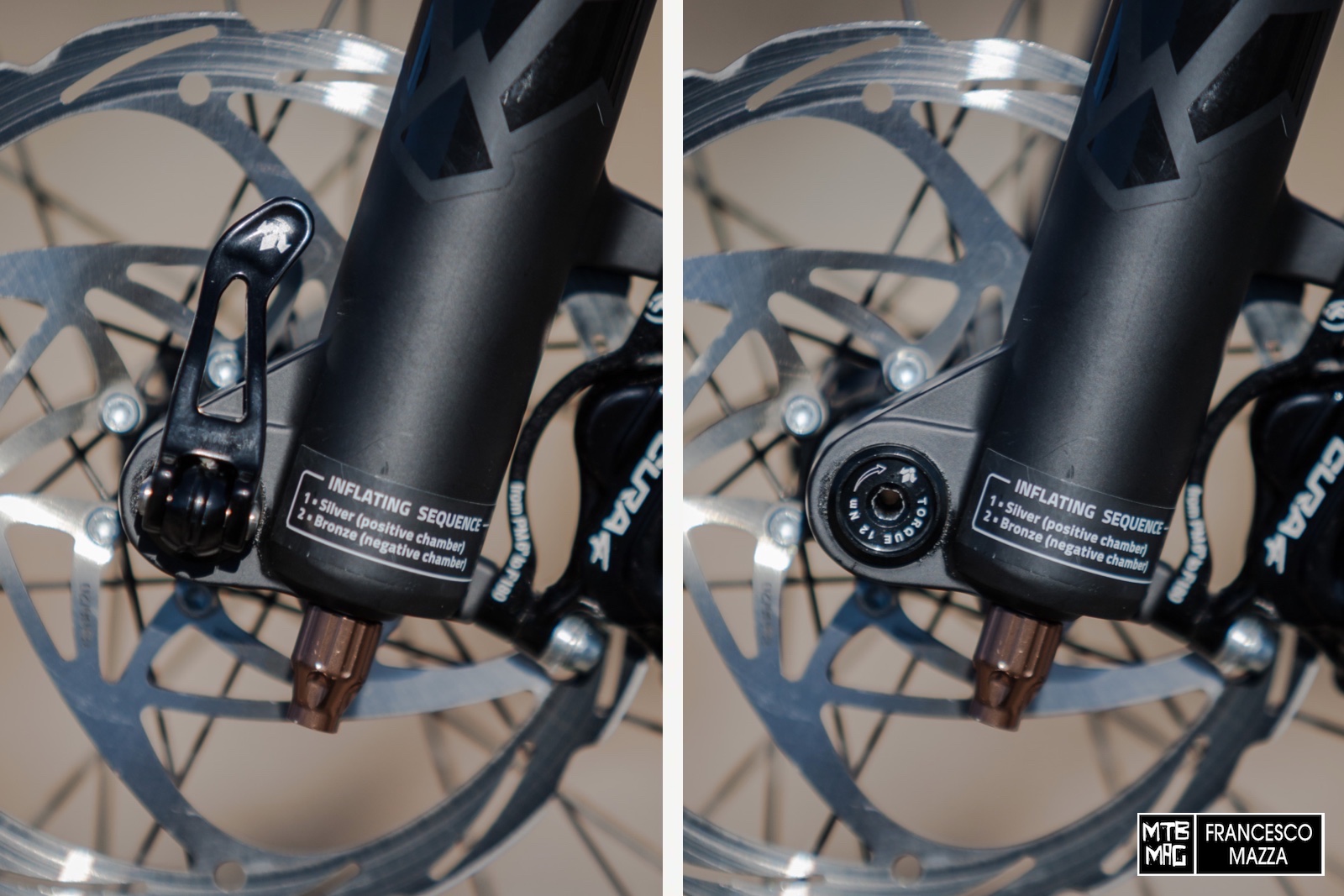 The Selva R is equipped with new, elegant and minimalist decals for 2019, which show the word Formula accompanied by a small logo on the arch, a larger lily logo on the side of each leg and a small Selva R inscription on the front. Available also as an option are the decals in a stealth colorway that give a sober and elegant but at the same time rather aggressive look, absolutely in line with the aesthetics of my MDE Damper 29. 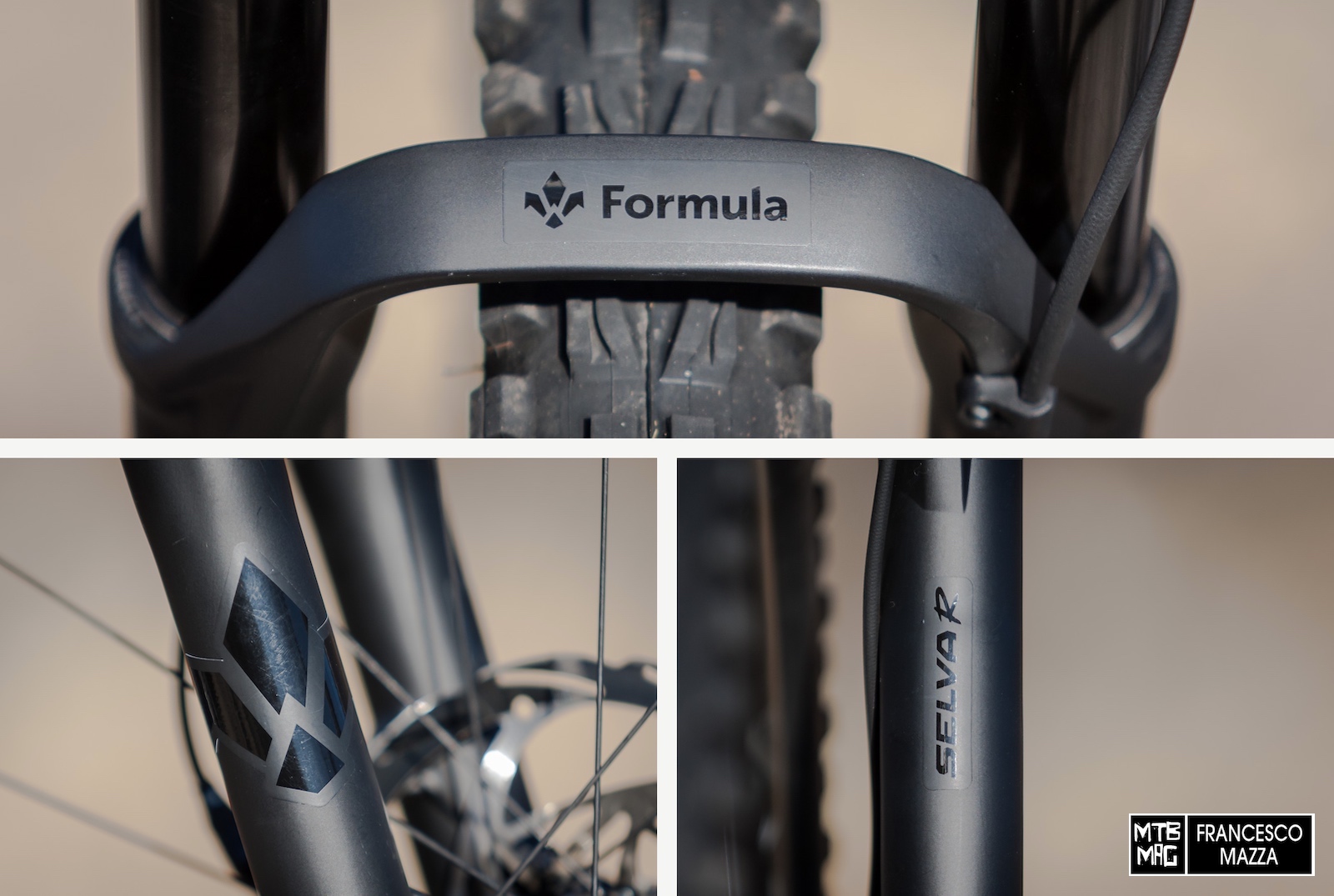 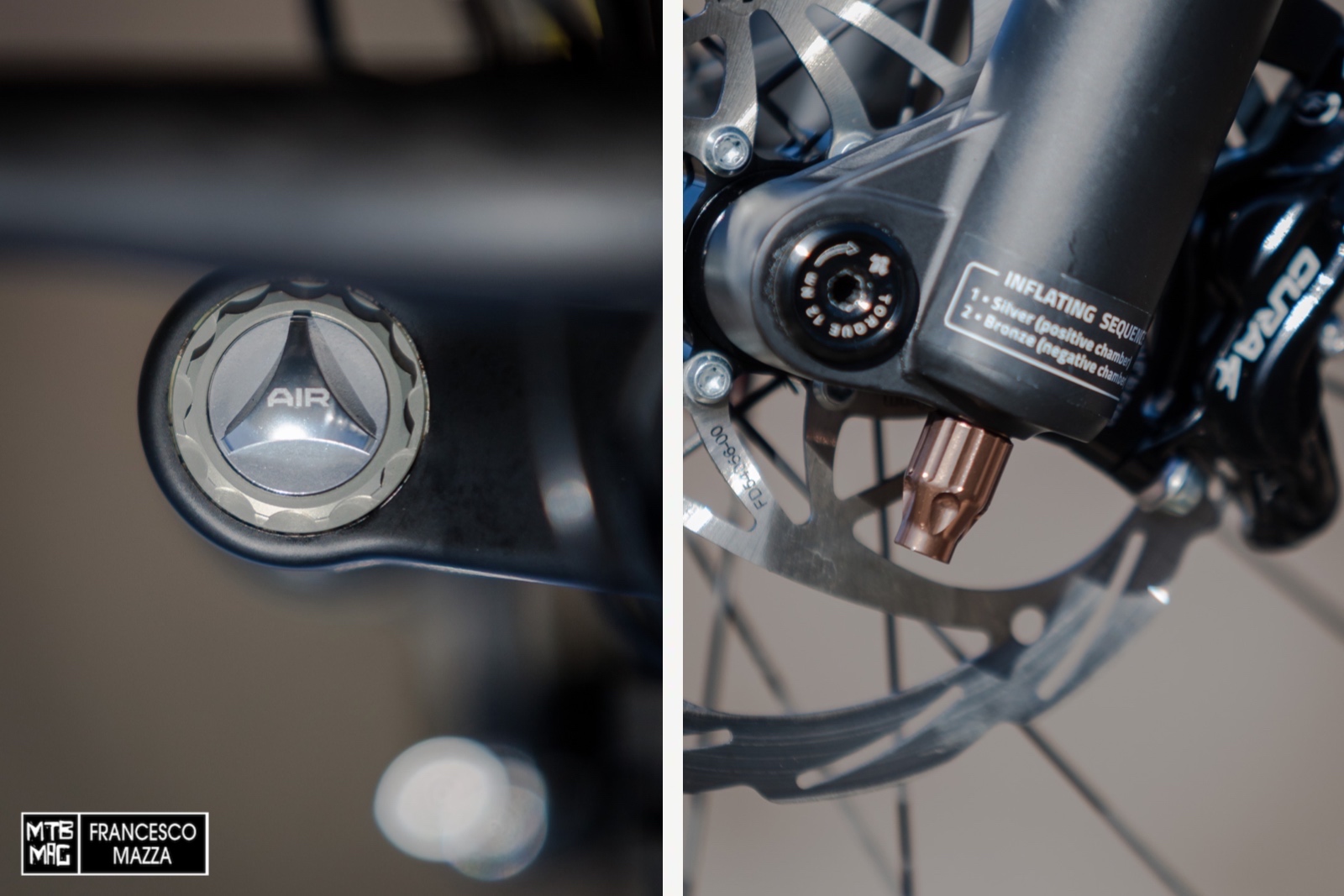 The separate management of the two air chambers thus allows more room for more range to achieve a further customized set-up. The table on the back side of the left stanchion indicates the recommended pressures for the positive and negative chambers, based on the weight of the rider. Whatever the pressure entered in the positive chamber, the negative chamber must have a pressure of about 20psi more, but a range of +/- 10psi is allowed and it is this variation that allows one to modify the behavior of the air spring curve and therefore of the fork. 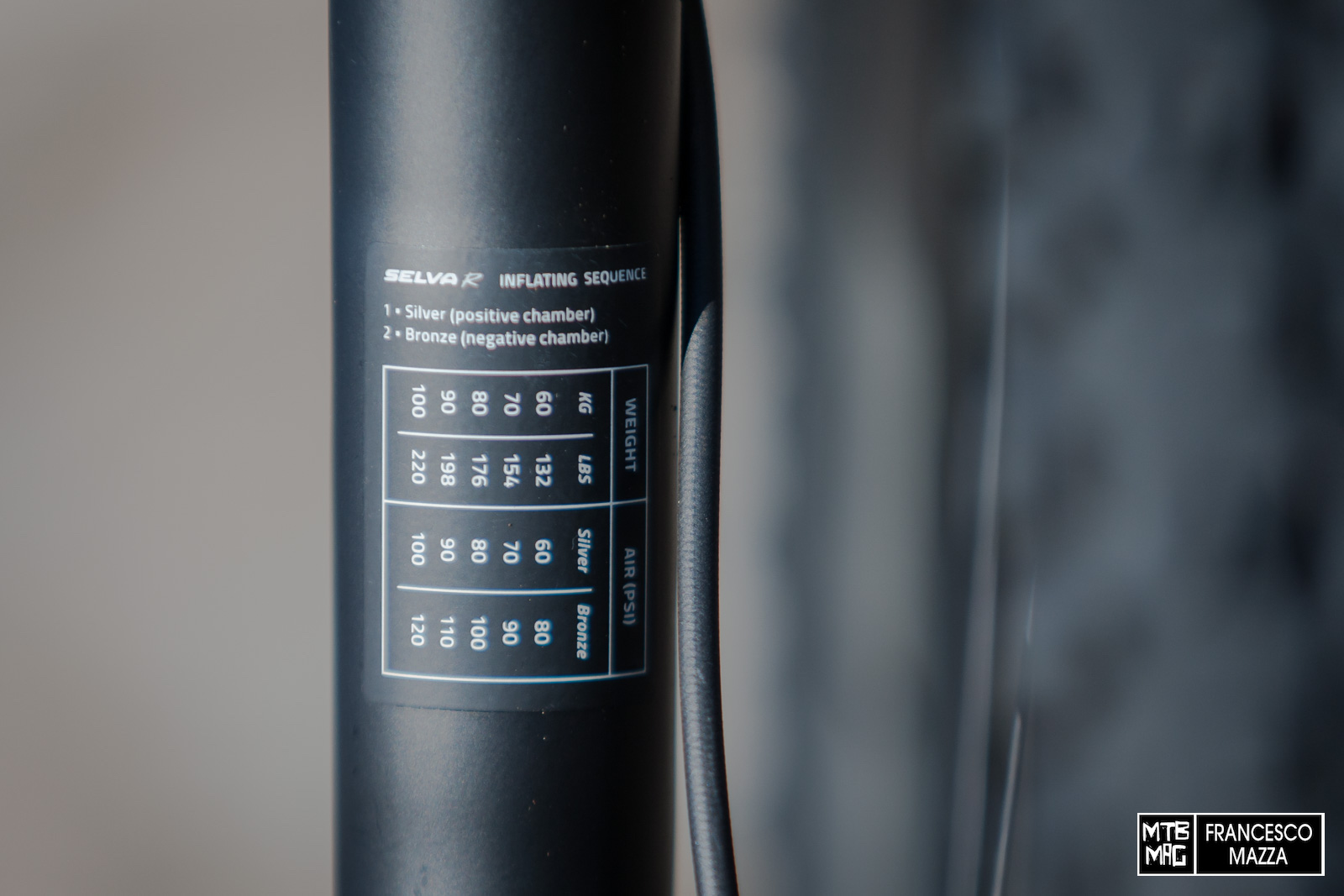 It is important to follow the negative chamber values ​​with min. 10 and max. 30psi more pressure than the positive chamber so as not to change the effective travel available in the fork. Equally important is the procedure of inflating the chambers, which requires a precise sequence. It is rather simple but needs to be carefully followed to be certain that the values ​​of the two chambers are correct. Formula recommends doing this with the bike in the stand or with the front wheel raised from the ground.

1. Start from the fork with both chambers (positive / Silver, negative / Bronze) empty
2. Enter the desired pressure in the positive chamber (Silver)
3. Close the lock-out of the fork on the hydraulic side (gold lever)
4. Enter the desired air pressure in the negative chamber (Bronze)
5. Release the fork by releasing the lock-out lever on the hydraulic side (gold lever)

It is clearly a more complex procedure than that required by most forks with equalized positive and negative air chambers or with negative coil, such as the Selva S, however once the steps of the procedure are memorized, the operation becomes simple and fast, as we can see in the video tutorial below. Remember, however, that the Selva R is aimed primarily at experienced racers and riders who are therefore considered to be generally more familiar with their suspension set-ups.

Before starting the Selva R test I rode a standard 27.5″ Selva mounted on the Intense Recluse, with which I performed the comparative test of the CTS valves, so I know the Formula product very well and this allowed me to focus mainly on the 2Air cartridge, which is the actual novelty introduced with Selva R. I then tried to replicate the behavior of the Selva that I already used, inserting an CTS Orange valve in the Selva R, instead of the Green one that I mounted in the Selva. The adoption of the Neopos volume reducers creates in itself a more supportive behavior that allowed me to rely on slightly lighter hydraulic valving. For the same reason, Formula provides a pre-installed CTS Gold, more “soft” than the CTS Blue which was supplied as standard in the Selva. 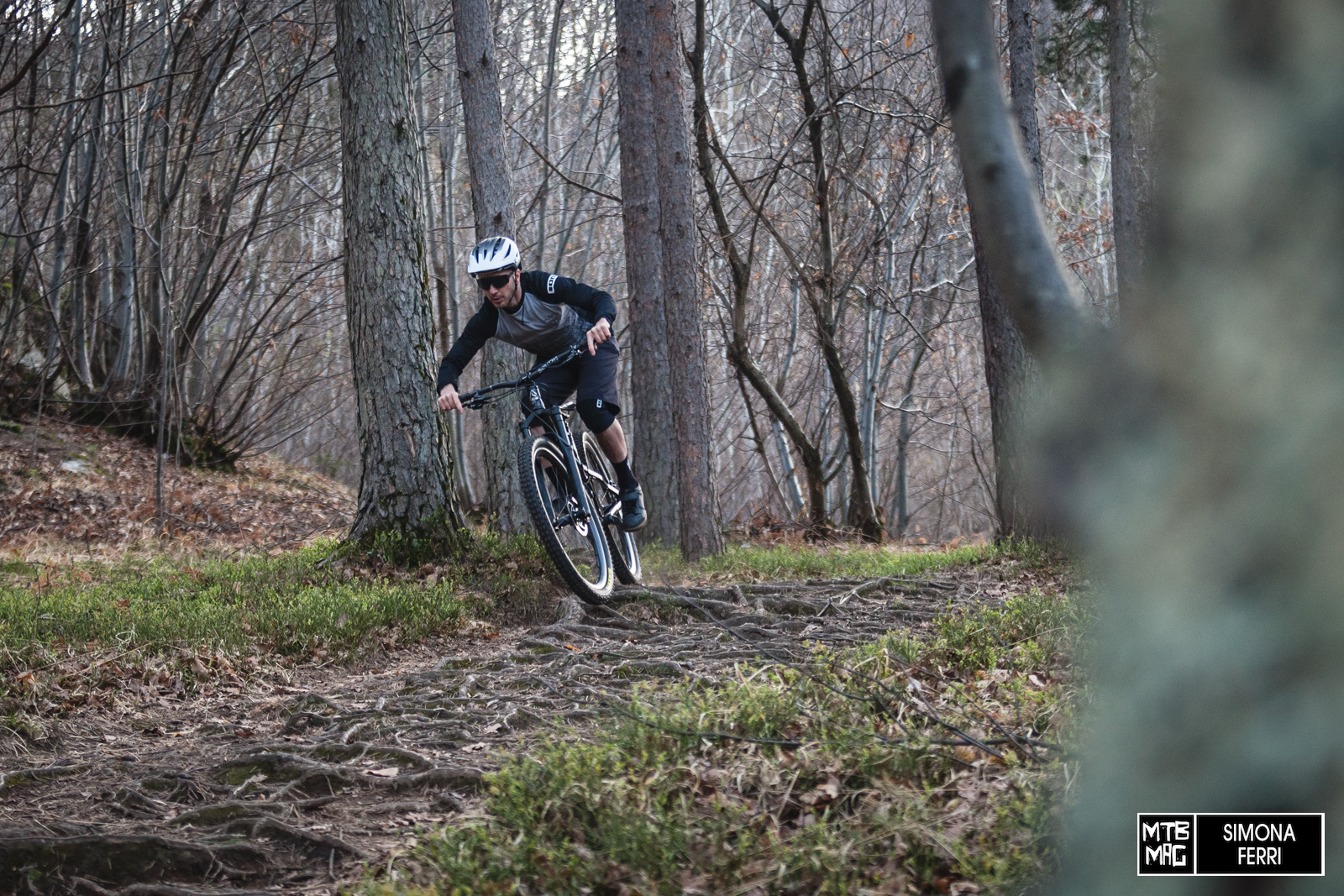 I started using Selva R with 20psi of difference between the pressure of the positive chamber and that of the negative chamber, as suggested by the Formula table, noting that in this way the behavior is comparable to that of the standard air chamber with a single negative spring. I then switched to different set-ups with negative chamber pressure between 20 and 30psi more than in the positive chamber and I found an effective increase in initial sensitivity and a greater softness of the fork up to the sag area, which affects mid travel, making it slightly softer. I then tried some set-ups with lower negative chamber pressure, between 10 and 20psi more than in the positive chamber, noting that the initial sensitivity, in general quite excellent on the Selva series, changed little, while the fork obtained a more supportive behaviorin the sag area, with a compression curve more similar for example to that of a spring fork. After these tests I changed the pressure several times also based on the trails that I knew I was going to ride, but always remaining in a range of +/- 5psi compared to the 20psi difference suggested by Formula which I believe remains the ideal setup for the most behavior balanced fork. 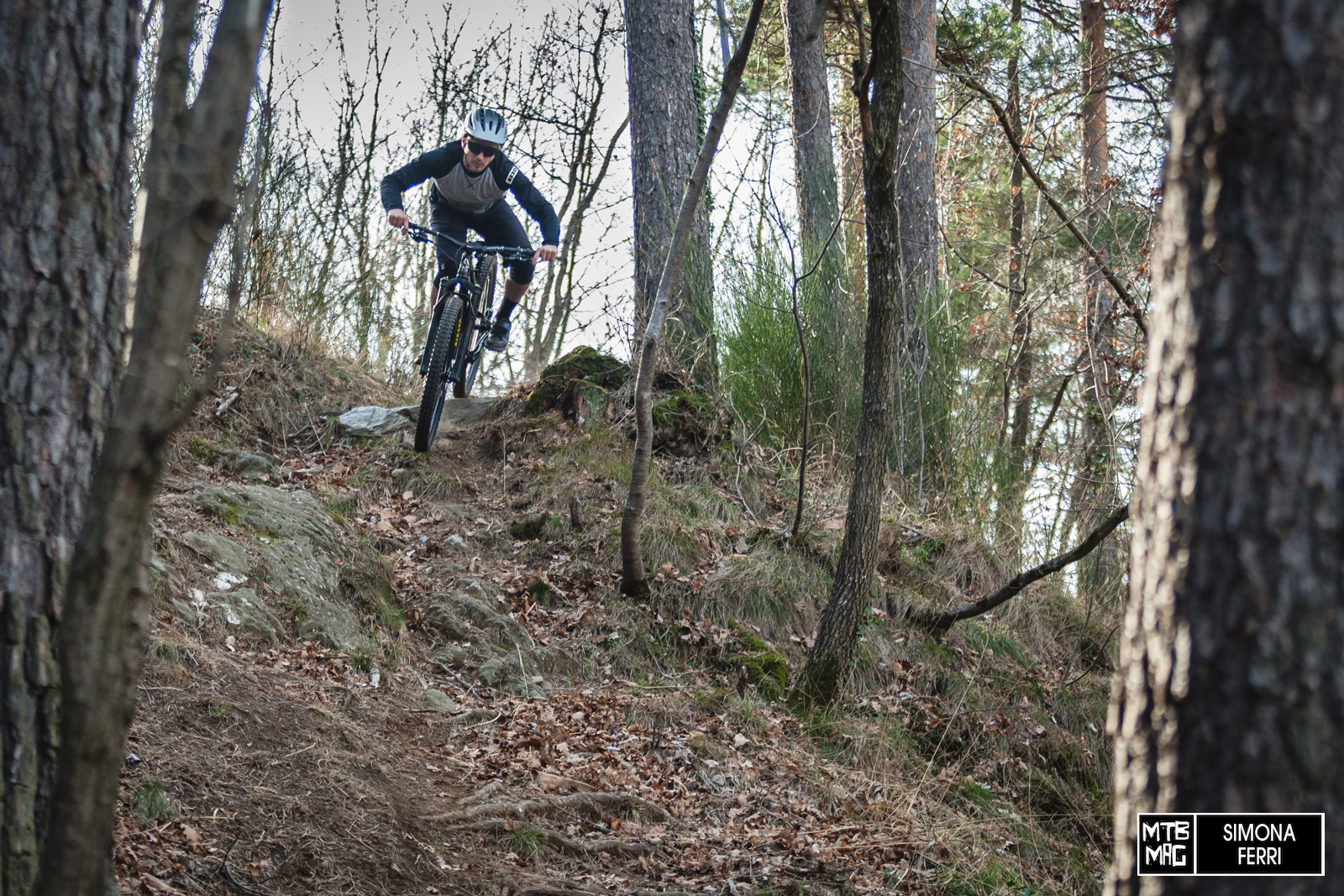 From this, therefore, we can see how the Selva S already has a truly excellent and balanced behavior. The greater range of adjustments offered by the Selva R thanks to the 2Air cartridge is aimed primarily at those experienced riders who need to accurately customize their ait spring curve. Whether this is due to searching for the best performance in the competitive arena or simply to get the most out of your fork while having fun, you can tune the entire compression curve section by section. While the 2Air cartridge makes it possible to intervene accurately and manage the first part of the stroke, the use of one or more Neopos makes it possible to intervene on the mid and especially end stroke of the travel, redefining the entire behavior of the fork.

All versions of the Selva R, regardless of travel, wheel size or axle dimensions, are sold at the same list price, except for the special Ultraviolet coloring which increases the price by 110 euros.